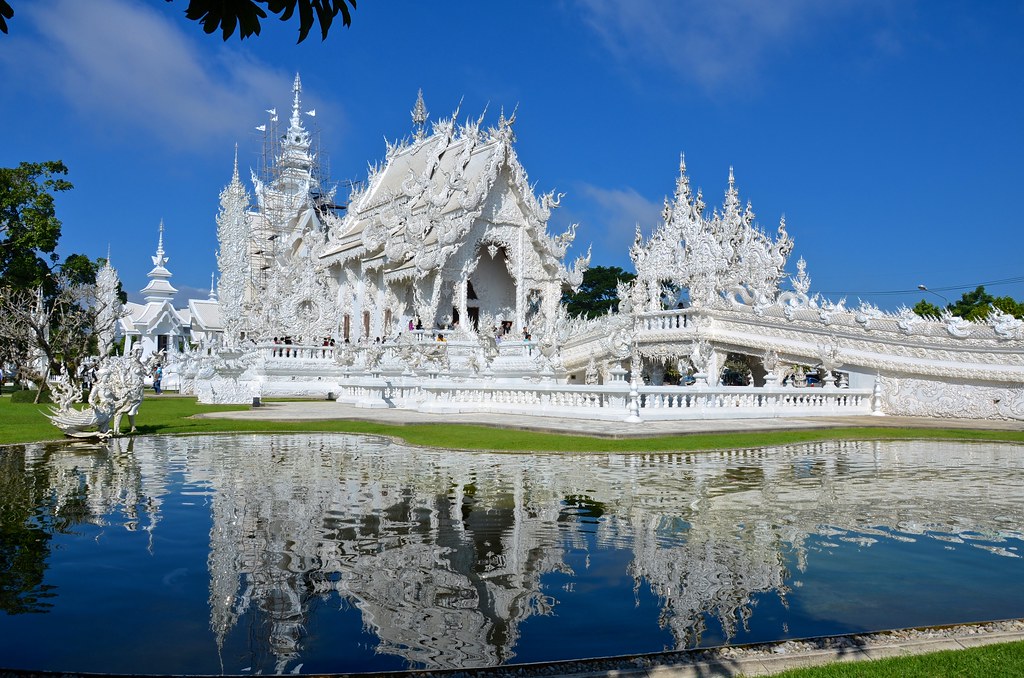 Chalermchai Kositpipat, a local artist, designed and constructed the temple and has spent over 40 million baht of his own money on the project. 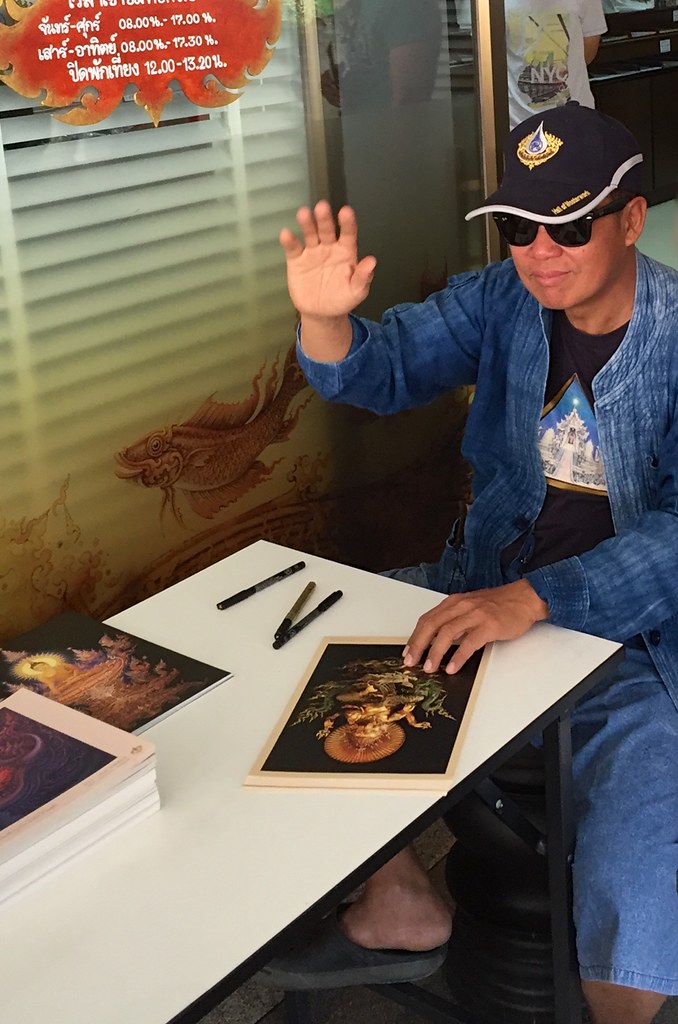 Kositpipat considers the temple to be an offering to Lord Buddha and believes the project will give him immortal life. 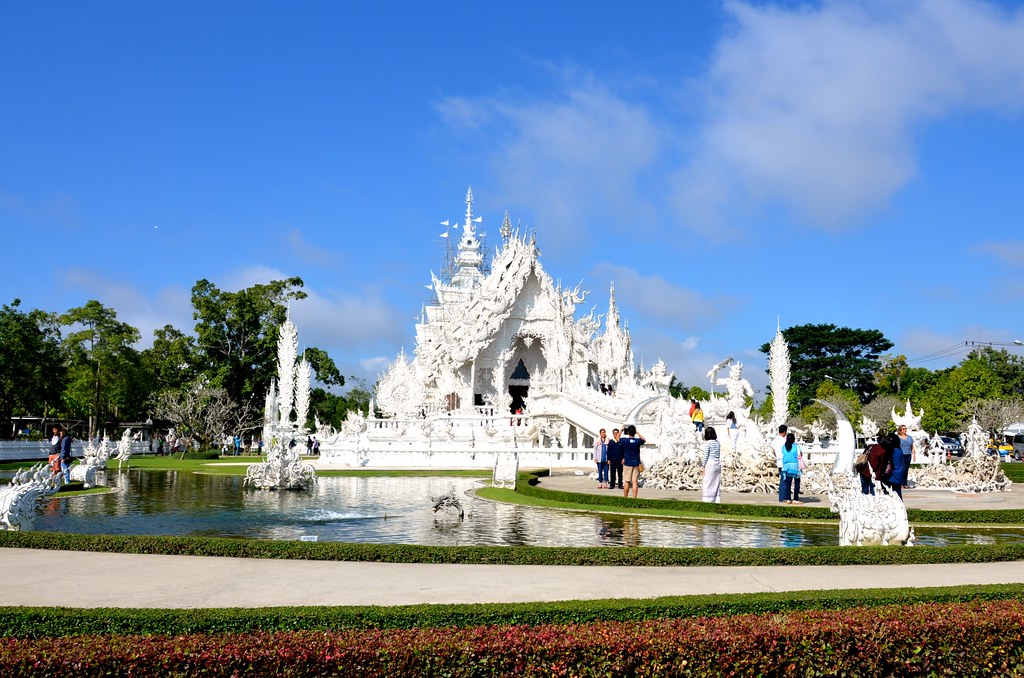 He opened the temple to visitors in 1997, however it is an ongoing project that is expected to be completed in 2070. 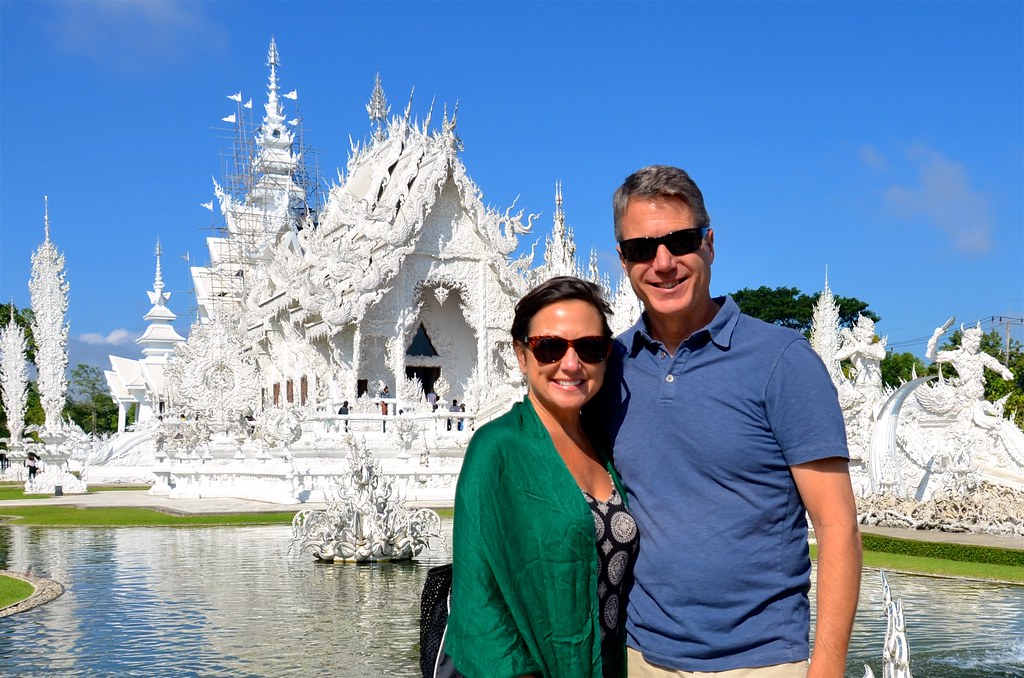 The main building is reached by crossing a bridge over a small lake. The bridge symbolizes the cycle of rebirth. 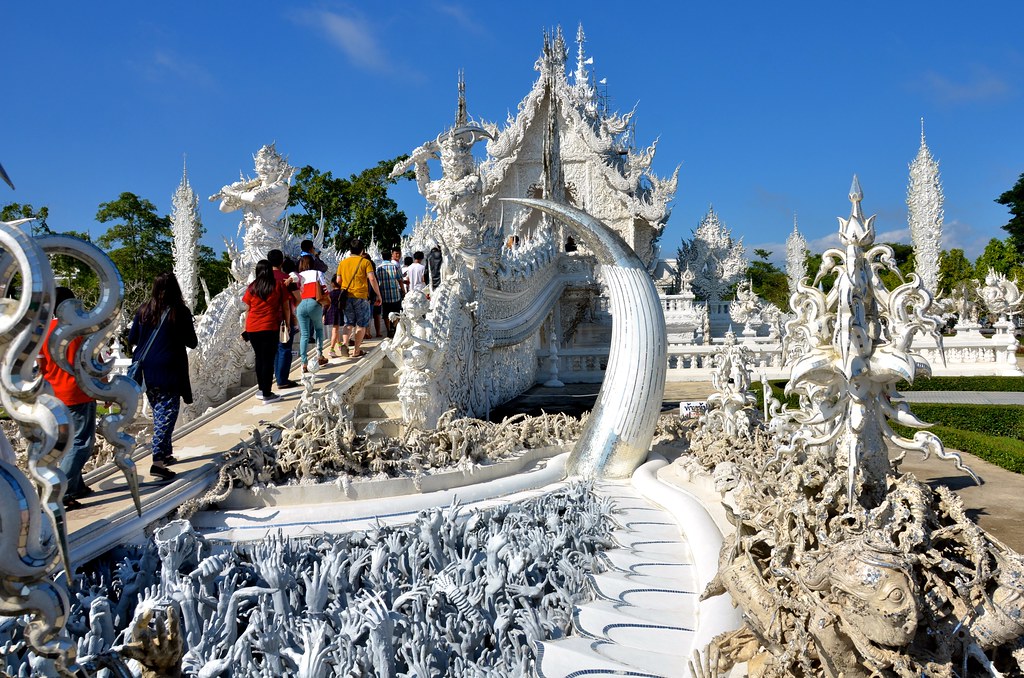 In front of the bridge are hundreds of outstretched hands and people suffering in hell: 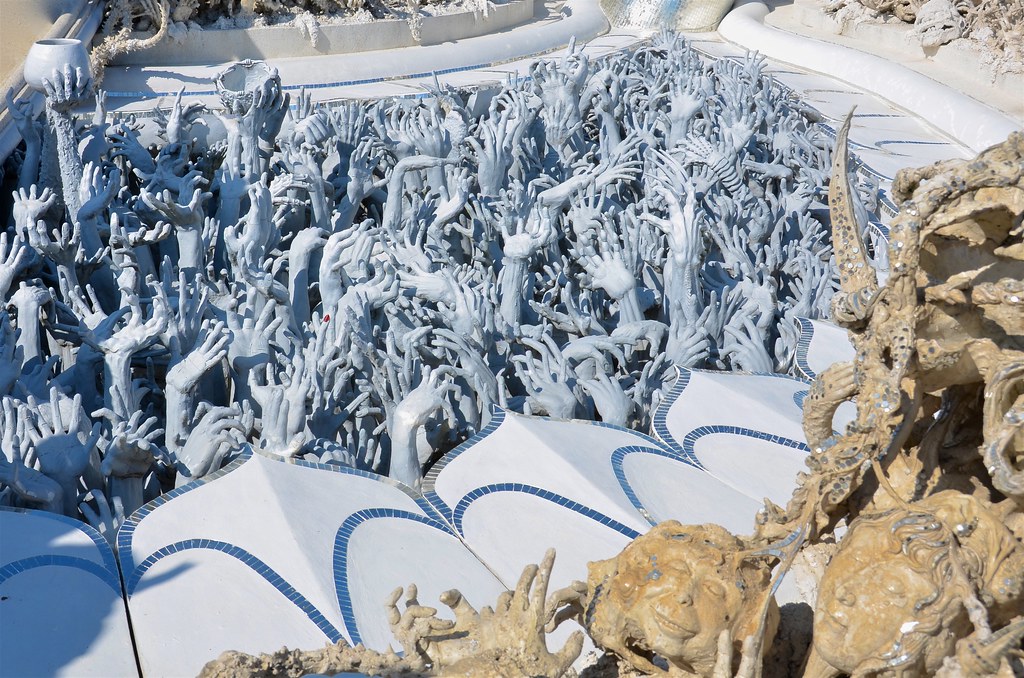 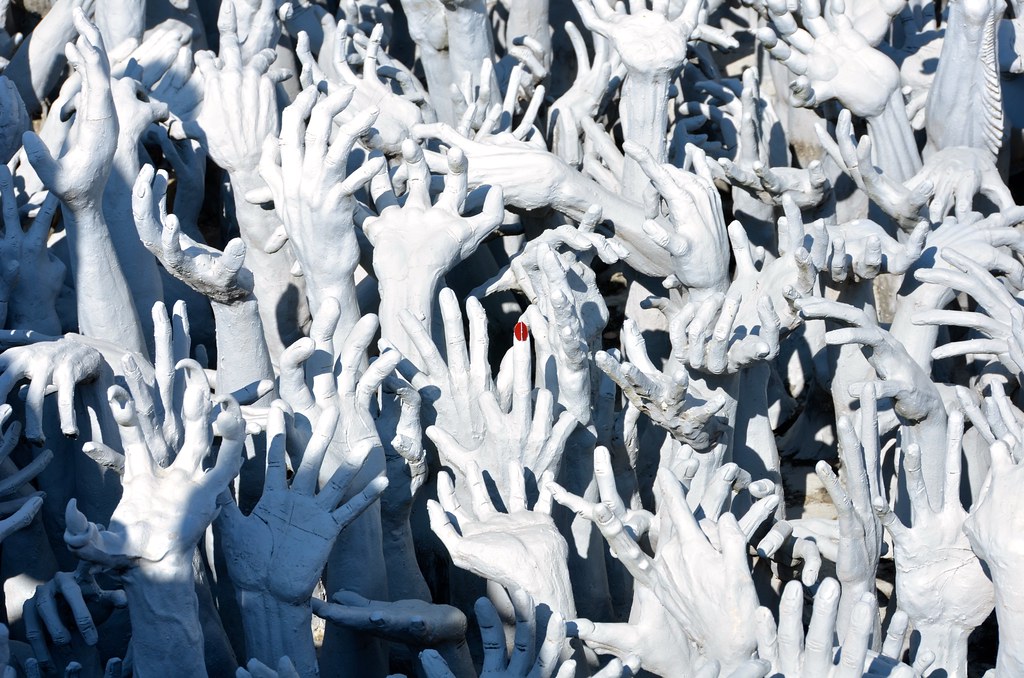 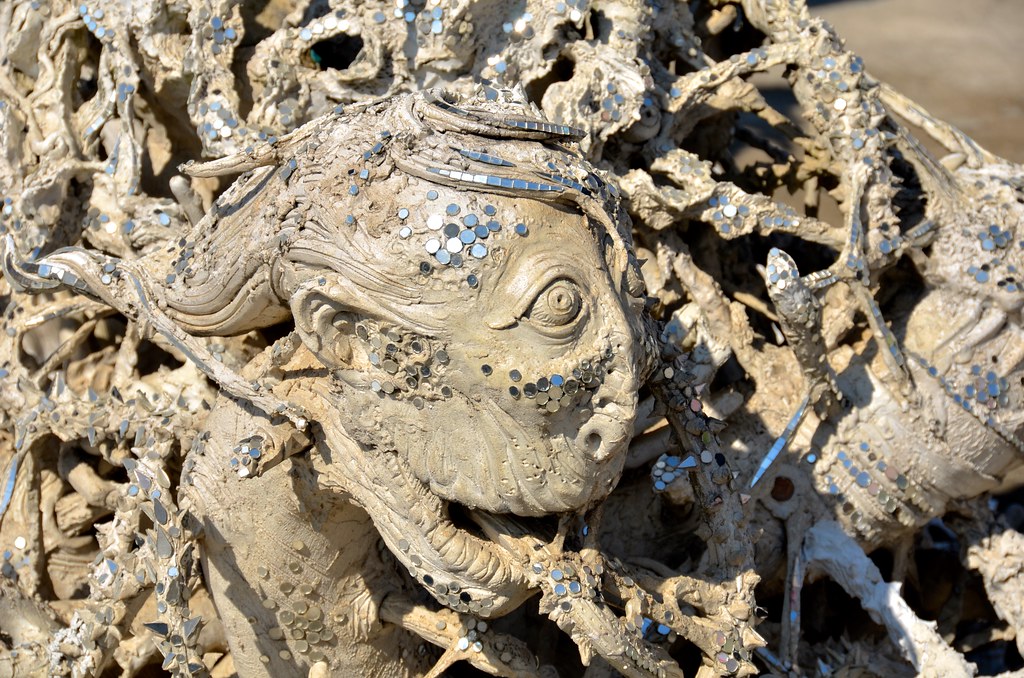 The bridge indicates that the way to happiness is by foregoing temptation, greed, and lust. 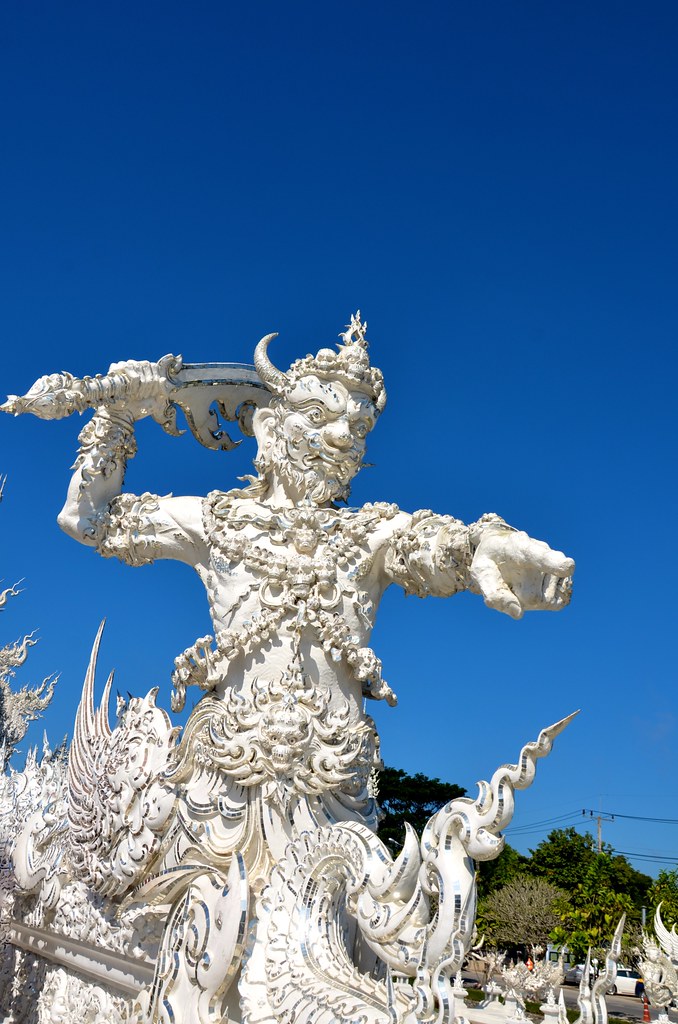 Once across the bridge, the “Gate of Heaven” is guarded by two creatures representing Death and Rahu. 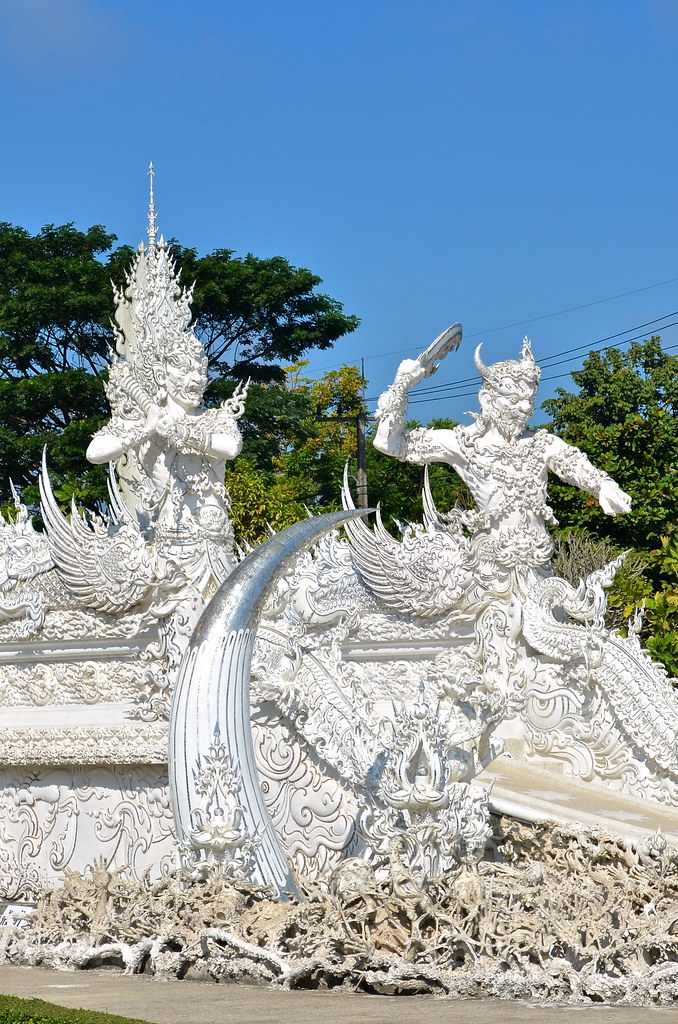 But then you are greeted with peace and tranquility. 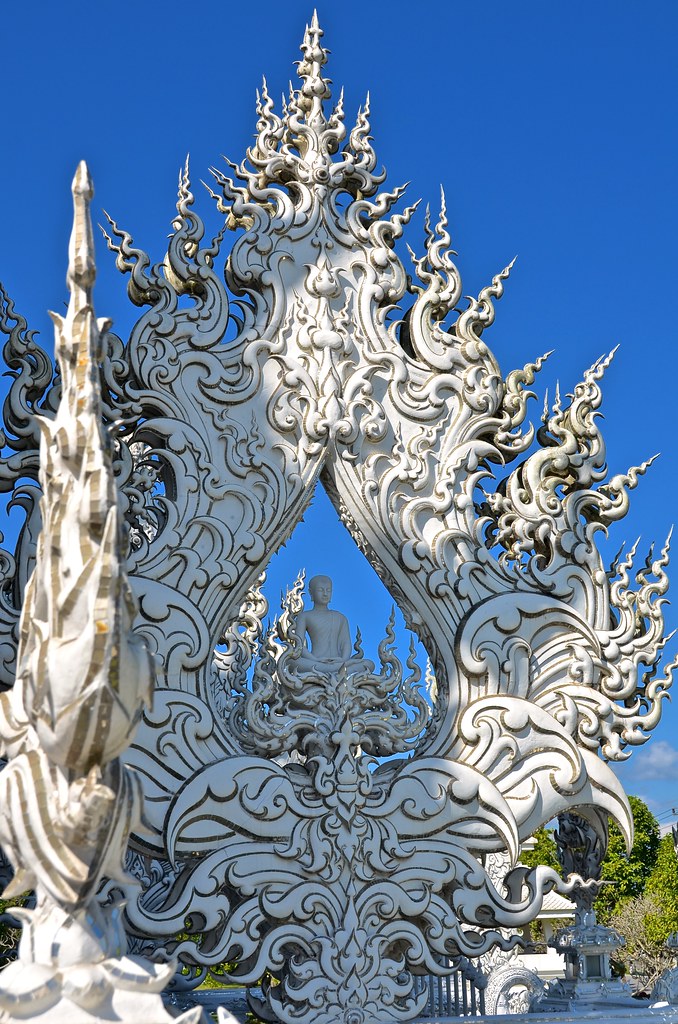 If you make it, of course. 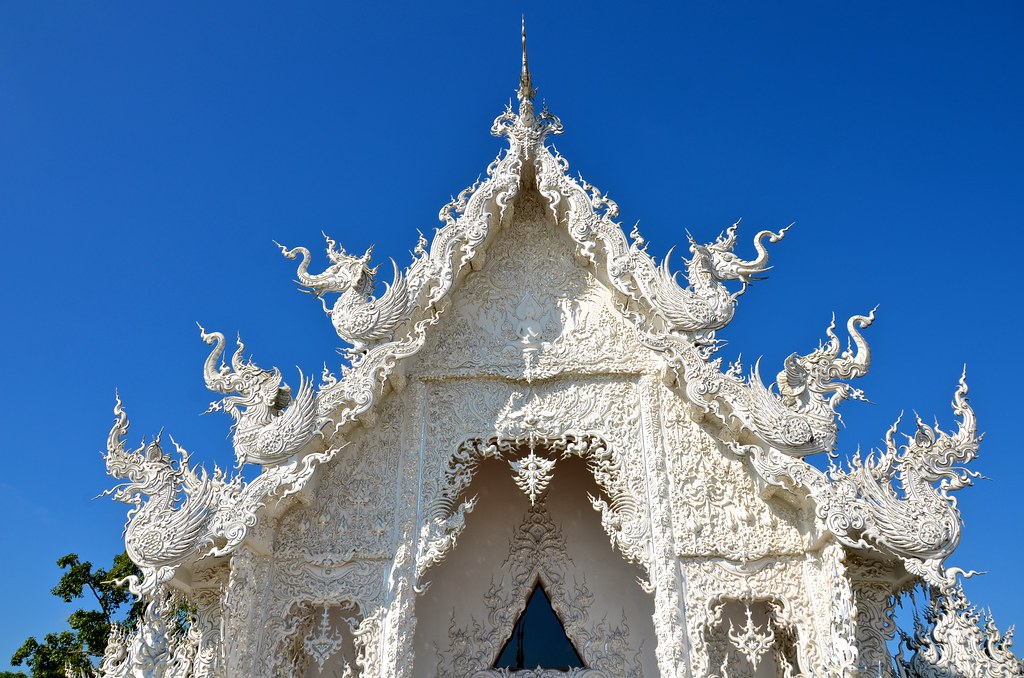 The three-tiered roof and abundant use of Naga serpents are elements from classic Thai architecture. 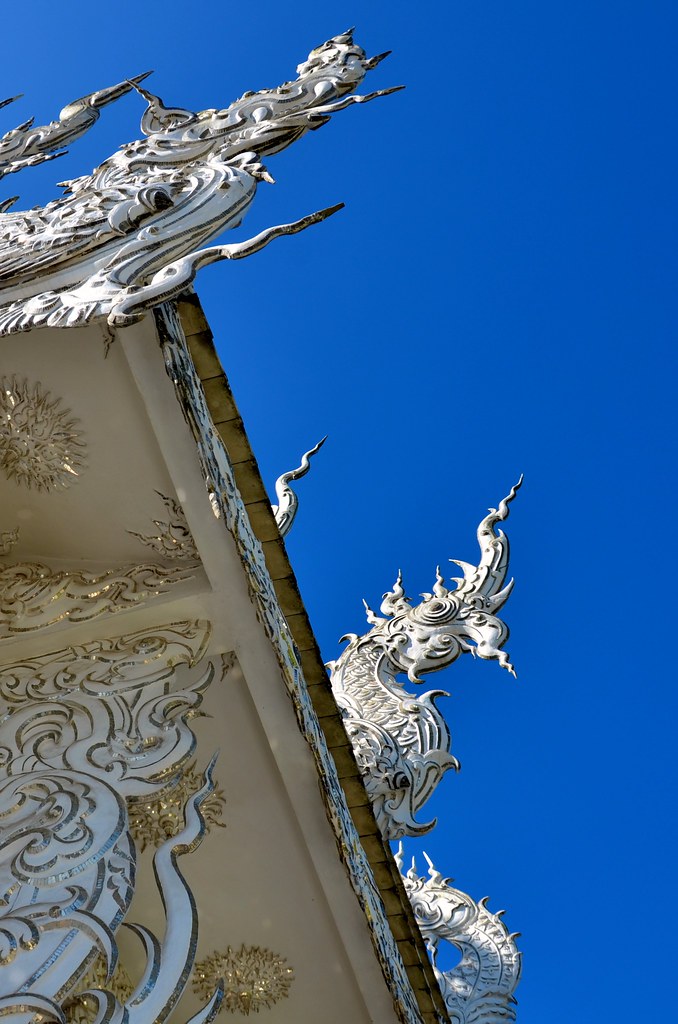 Once inside, the Temple is far from classic. The Temple’s theme quickly moves from elegant to bizarre and eccentric.

On the far end of the ubosot sits a white and a gold Buddha with a large Buddha mural behind them, but they are overshadowed by the mural on the opposite wall.

What about Darth Vader, the Hulk, Jack Sparrow, Spiderman, Superman, or Neo from The Matrix?

There is even a section on the mural with the Twin Towers being destroyed by terrorist on 9/11.

Photography is prohibited inside and since I behaved for once, HERE is an image I found on Brainberries.

So what does it all mean?

Chalermchai Kositpipat refers to it as “the killing of the innocence”. His mural portrays the misery and distress of today’s modern world such as war and greed and how heroes, like superman, can’t save us.

We left the main building and went out to explore the gardens where we found ghostly heads hang from trees: 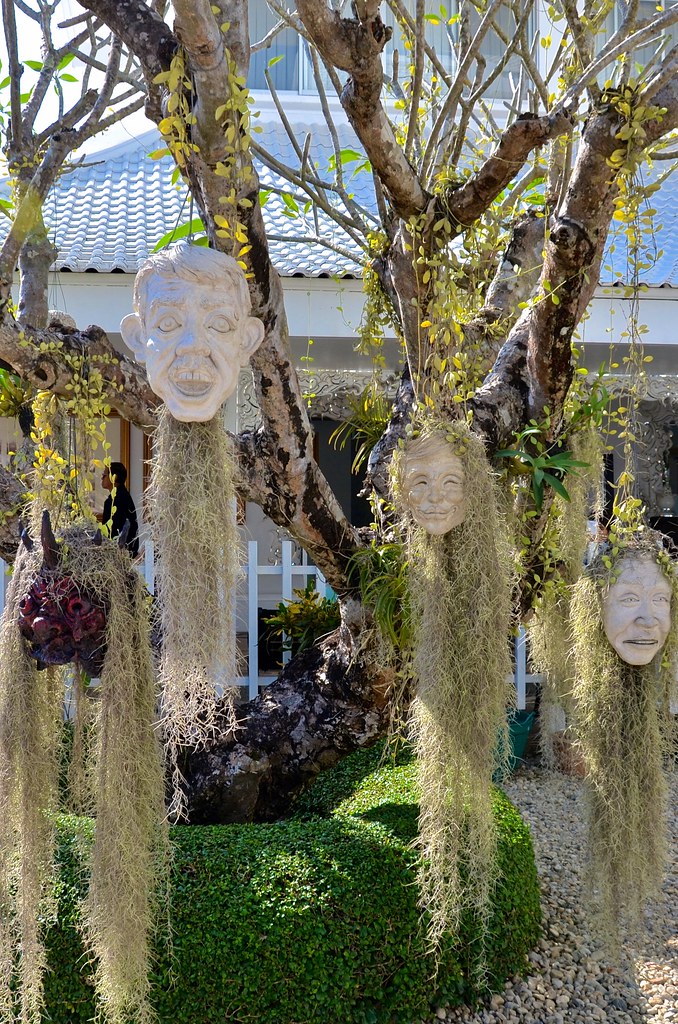 And a creepy skull with a whisky bottle on top: 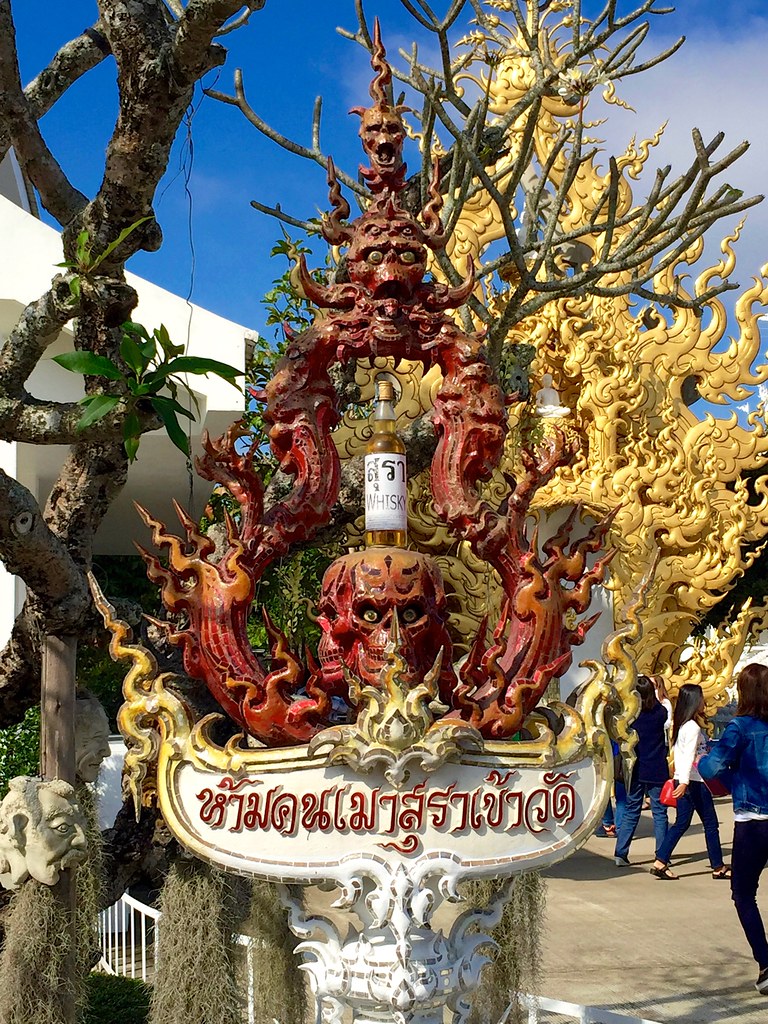 I assume this is to represent the evils of alcohol.

Further into the garden was another Buddha where Buddhist prayed and requested a favor to Buddha: 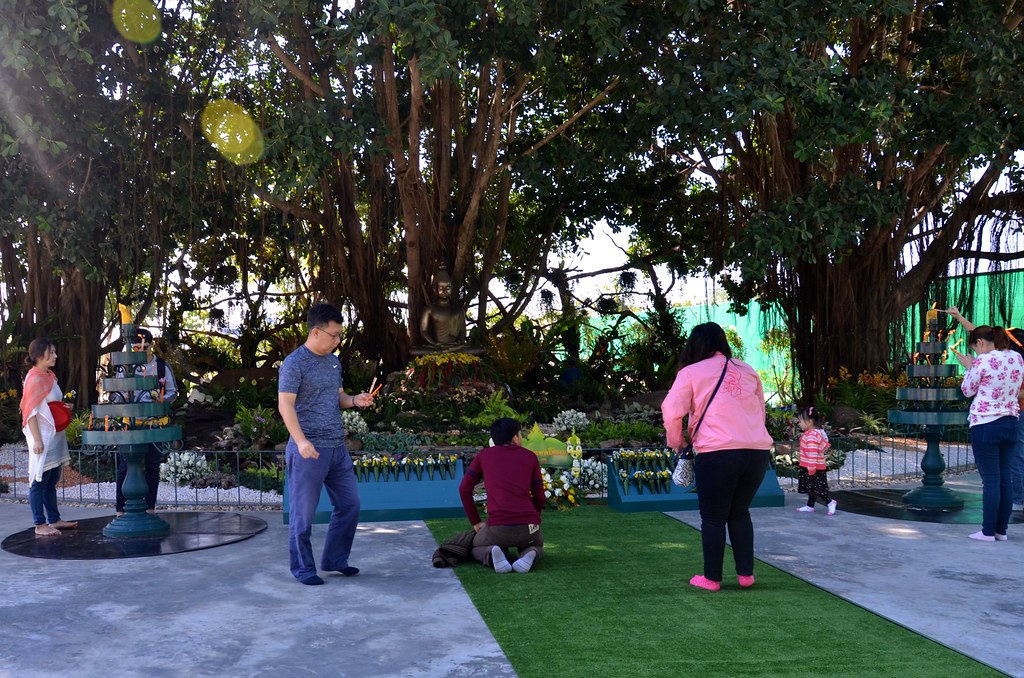 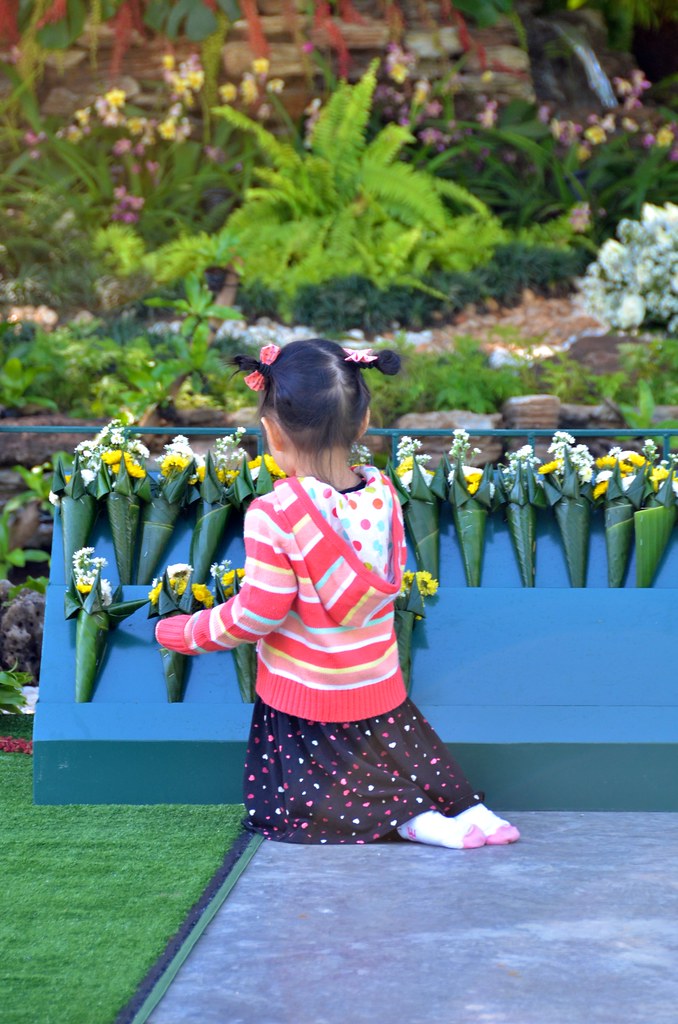 And a large tree filled with thousands of silver wish charms. 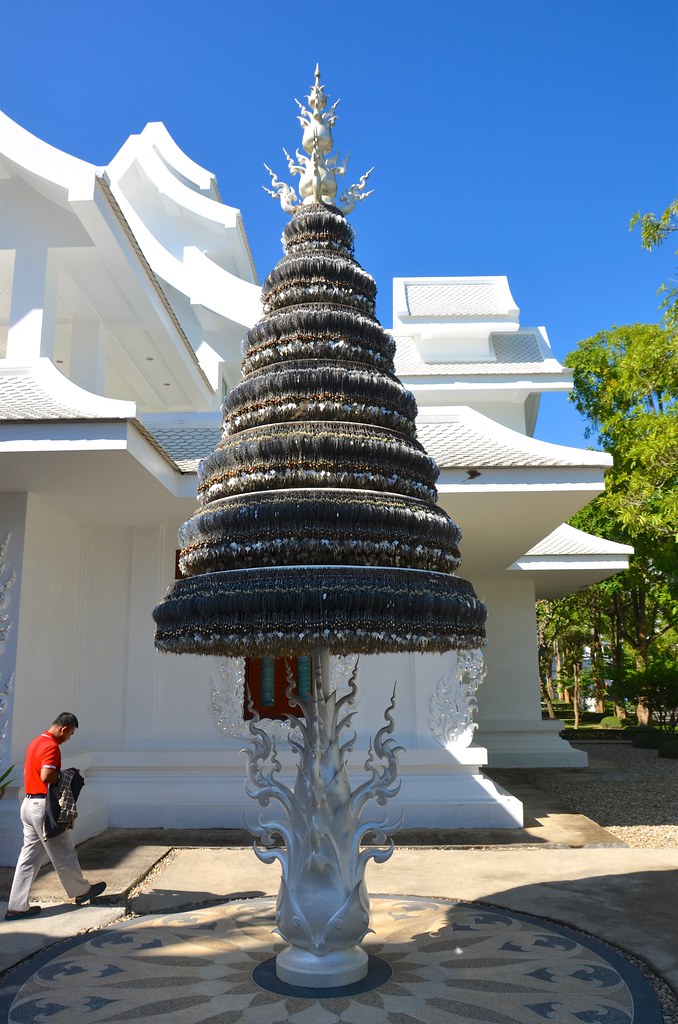 Each charm had a personal handwritten wish: 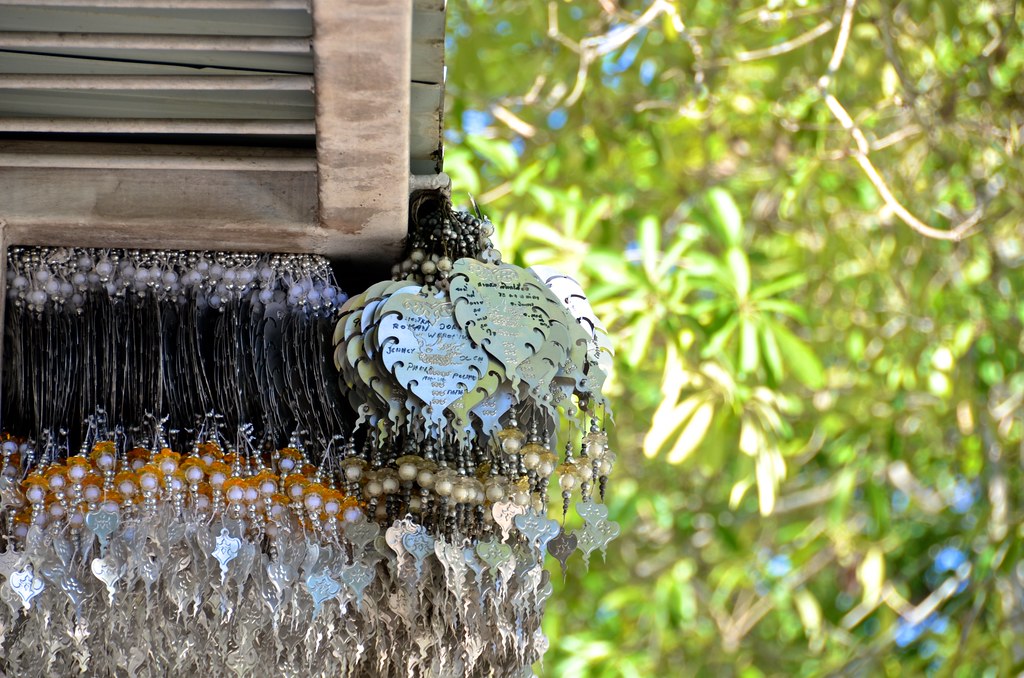 Chalermchai Kositpipat intends for part of it to be a center of learning and meditation and for people to gain benefit from the Buddhist teachings.

Wat Rong Khun is unquestionably an unconventional Buddhist temple, but I am always intrigued by an artist’s mind.

Of course we couldn’t have picked a more perfect day to visit. The shimmering temple against that deep blue sky was exhilarating. 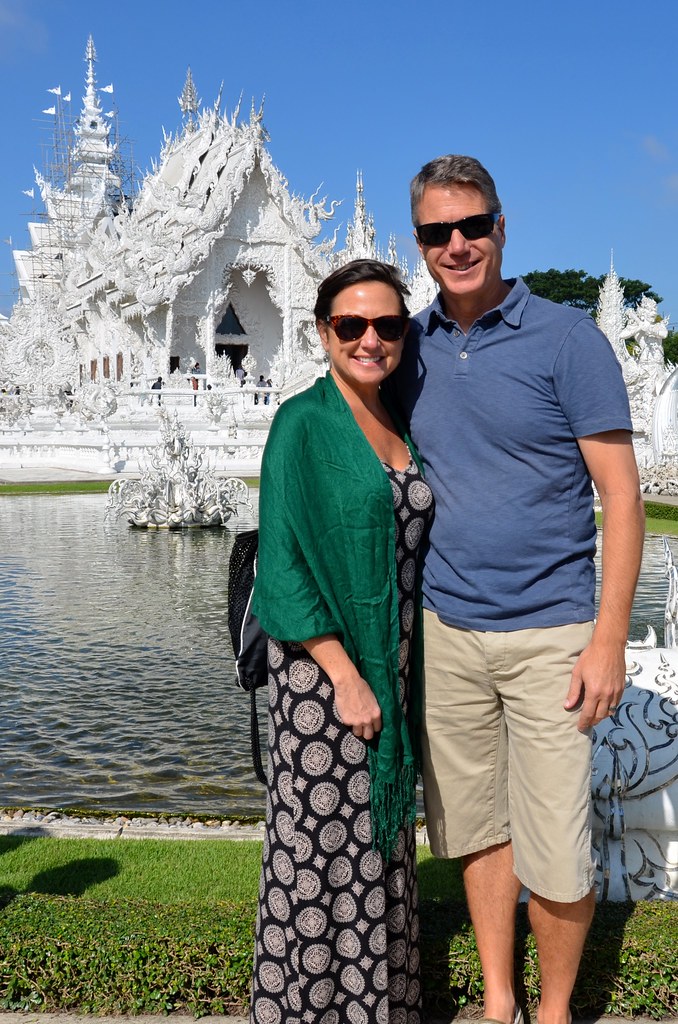 Admission is free.
Donations are accepted however they are not to exceed 10,000 baht, as the artist refuses to be influenced by big donors.

Our visit to The White Temple was part of a full-day tour we went on with Travel Hub Chiangmai.

Their full-day tour to the Chiang Rai province offered a lot of flexibility based on the things we wanted to do and see.

Other stops of the day were Karen Long Neck Village, Crossing the border from Thailand to Myanmar, and The Golden Triangle.

3 Responses to "The White Temple"